LIFE IN NEW JERSEY: Now that it’s spring, it’s a perfect time to see close-up, some of the best examples of New Jersey wildlife, without even leaving your own backyard.

Coming from Australia, I didn’t really know much about what animals lived here or where you might even see them. I’m embarrassed to admit that most of my perceptions of these animals had previously come from movies and cartoons.

With this culturally limited education, it came as a pleasant surprise to find that in New Jersey, wildlife is plentiful. Even more surprisingly, I didn’t even have to venture far to experience these animals-they’re just outside my back door.

As the most common native animal in New Jersey, squirrels are seen just about anywhere there are trees; and that’s almost everywhere in New Jersey. Unlike many other animals, they are very active during the day. Although it’s been over three years since we arrived, I still find them mesmerizing to watch. When I see them trying to chew an acorn, ‘Scrat’ from the Ice Age movies comes to mind immediately! 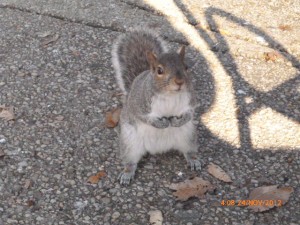 US Squirrel close up. Photo © ExpatAussieInNJ

Here is another favorite subject of animation movies: chipmunks. In real life they do twitch and act a lot like Alvin, although they are much harder to see for more than a few seconds. Chipmunks are very wary of predators, tending to dart nervously around edges of buildings and in between cracks and are hence hard to capture in a photo. The species you will see in New Jersey is the Eastern Chipmunk. They are truly gorgeous little creatures and if you have some living in your backyard, then consider that a real treat. 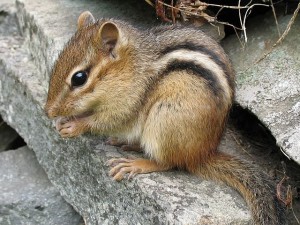 I always imagined groundhogs to be like moles, furry burrowing creatures that dig up through a hole on occasions to see what is around. But groundhogs (also known as wood-chucks) can be seen out and about a lot more frequently, at least where we live – even in the shopping car park. Even though they don’t look like it, apparently they can be aggressive, so be cautious approaching them. They seem to be similar to wombats: cuddly looking but something to be wary of.

As they hibernate during winter, it won’t be until spring time e.g. March or April that they can be seen. 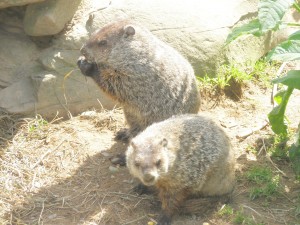 These are animals that are little known to most Australians except for the fact they can squirt some unpleasant liquid at you when frightened. What I didn’t know was what a beautiful animal skunks are to look at. The closest I came to one so far, was at night. Out of nowhere, it appeared from under the car next to me and moved onto the front lawn. Once it saw me, it stopped dead in its tracks, tail held high and aimed directly at me. Fortunately it was too far away to spray me (phew!) as the smell is meant to be truly putrid. But there was enough light to see the skunk’s amazing feather duster tail which shimmered beautifully in the moonlight.

Skunks are mostly active during the night and may carry rabies, so they should also be treated cautiously. They can dig up your backyard looking for food and will frequent around garbage areas looking for discarded food.

The striped skunk is common around New Jersey urban areas and townships. Don’t get too close to its rear end! Photo by Dan and Lin Dzurisin, courtesy of Wikimedia commons.

Just when you think that there are only possums in Australia, you find out that the USA has its own version called the Virginia opossum. In the dark, they look rather like a large rat close-up: lightly coloured, a long, rat-like tail and a mouth full of teeth.  This was my first thought, when a rather large specimen appeared at my feet one night while I was standing looking up at the stars. What a surprise! That experience definitely aged me a few years.

Opossums are nocturnal, often solitary mammals that sometimes use abandoned burrows and can even burrow under houses. They may be less easy to spot than many of the other animals listed here. 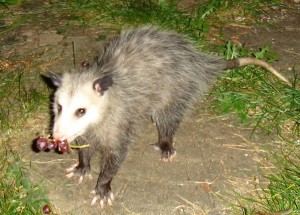 The Virginia Opossum. Although they are harmless, they can sure give you a fright in the middle of the night if you don’t know what they are. Photo by Risssa, courtesy of Wikimedia commons.

Even though this is another beautiful looking animal, this one is the scourge of urban neighbourhoods in New Jersey. This is because of its predilection for rifling through garbage and the worrying fact it carries rabies. Raccoons are fairly common in New Jersey although you may not see them except at night when they are most active. It is a good idea to secure all garbage bins, ensure they are well sealed, so that they cannot be knocked over, or ripped open to get food.

Even though they are fairly large, it is difficult to spot exactly where they hide during the day. Raccoons can also be quite aggressive and will bite. Considering the risk, it is not worth tempting fate by getting too close, or even encouraging them to keep visiting by leaving food scraps within easy reach. 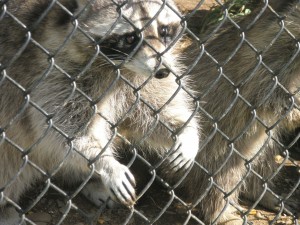 A raccoon at a local wildlife park in New Jersey. Photo © ExpatAussieInNJ

The white-tailed deer is a native species to North America. You may see this majestic animal, often in small groups, wandering in and out of New Jersey back yards. They are found in both forested environments and savanna plains. It is so widely distributed in some places that hunting is used to keep numbers down. Due to ongoing hunting, some deer are very wary of people and will move away very quickly. When they sense danger, the deer’s white tail is used as a warning flag which they raise for other deer to see.

When driving in late afternoons, be careful of them scampering across roads in front of your vehicle. 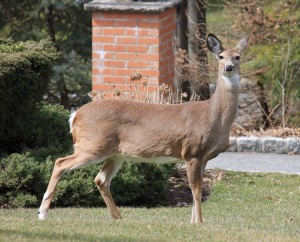 A white-tailed deer at Tenafly, New Jersey near the Nature Centre, about to run away to safety. Photo © ExpatAussieInNJ

What sort of wildlife have you seen in your backyard in New Jersey?