LIFE IN NEW JERSEY: Driving in New Jersey is really not that hard once you get used to the rules and the amazing labyrinth that makes up the road system.

Before you start thinking about how to navigate from one place to another though, you need to familiarize yourself with the basics. Most of this information is covered in the driving rules test that you will need to pass to get a New Jersey drivers license. But I’ve added in a few extra insights to make the driving experience less of a gob-smack and to help you stay on the right side of the law.

1.  There are lots of Road Signs

There are a lot of road signs to get used to when you drive here. Most are very easily understood and often use international sign language, so require no explanation. There are some signs that entail different road rules or are very important to driving safely around New Jersey roads. 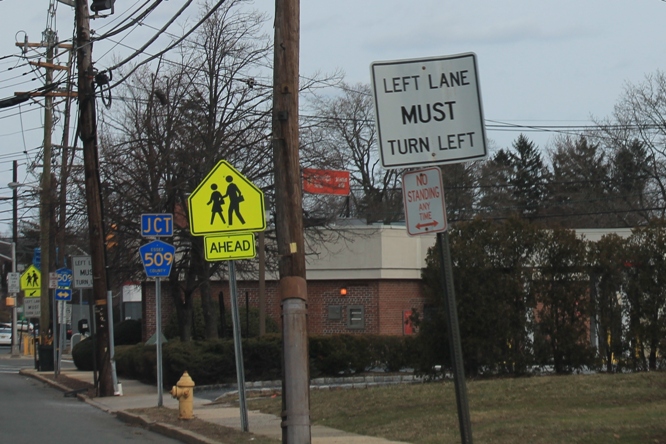 New Jersey roads have lots of road signs to be aware of as shown here. Photo © ExpatAussieInNJ

Many of these relate to driving rules such as four-way Stop signs (read more at Five New Jersey Driving Rules Australian Expats Should Know ).

3.  There are four major type of Roads

The major types of roads here are designated with a specific type of road sign to differentiate them.

An Interstate Highway is a freeway that is part of a countrywide network that usually crosses into another state and is part of the National Highway system around the USA.  An example of this is the I-287 which enters NJ from NY State near Mahwah, and terminates in the I-95 at Edison NJ. The Interstate sign is badge-shaped, red and blue coloured with white text. There are 13 interstate routes that enter New Jersey. 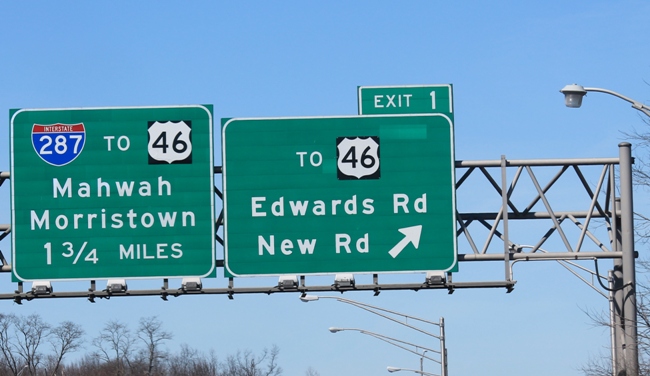 A U.S. Route or U.S. Highway (often called US numbered Highway) is indicated by a black square with the Route number marked in a white badge shape in black text. There are 13 U.S. routes in New Jersey.

A State highway (often just called Route x) is indicated by a black square with the Route number marked in a white circle shape in black text. Four major state roads that include the NJ Turnpike, the Garden State Parkway, The Atlantic City Expressway and the Palisades Interstate Parkway are still state routes (allocated route numbers) but are only identified by their common names on road signage throughout the state. 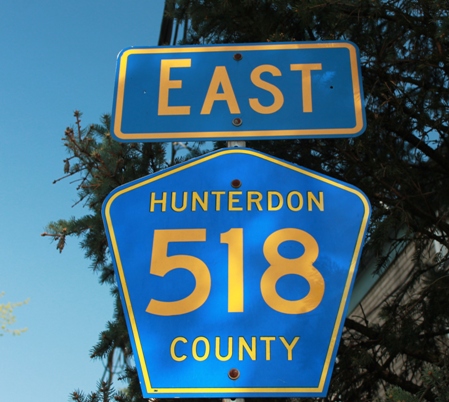 A County Road is a smaller (secondary) but still important road indicated by a blue badge shape and yellow text.

4.  Tolls are common in New Jersey

Paying road tolls is a fact of life in New Jersey. When entering a toll plaza, the easiest way to manage this is to have an E-Z Pass; an electronic tag that attaches to your windshield that is read by an antenna when you drive through. This automatically deducts the toll from an account that you set up prior through E-Z Pass. The tag will be sent to you when you set up a pre-paid account. You can also purchase an E-Z Pass On-the-Go package from some retailers which allows you to start using a tag immediately. This is the fastest and easiest way to get through all toll plazas in New Jersey, New York and a number of other eastern US states.

A toll plaza (toll booths) at an entrance ramp for the Garden State Parkway in NJ with two options for paying: using exact change or E-Z Pass. Photo © ExpatAussieInNJ

However there are still options at the toll booths for paying with exact coinage or getting change. These though can be incredibly slow to get through.

Roads that require tolls include the New Jersey Turnpike, the Garden State Parkway, the Atlantic City Expressway and most bridges that you cross to enter or exit New Jersey state borders. Toll costs are fairly low for most roads at anything from 0.25c to a few dollars, except for bridge/tunnel tolls which are much more expensive e.g. the Lincoln tunnel costs US $10 for a one way trip.

Peak hour traffic occurs between approximately 7am-9am and 4.30-6.30pm weekdays. There are no ‘clearways’ marked as in Australia but roads will be signposted with ‘No Stopping or Standing’ or parking restrictions that dictate when it is prohibited. Peak hour is known as ‘rush hour’ in the U.S. This time of the day can be nightmarish with traffic delays so avoid driving in these times if you can.

Like most countries with developed road systems, New Jersey has frequent road stops for drivers to pull into for rest or refreshment. 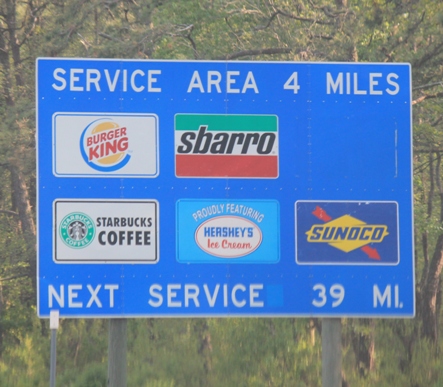 These areas often have a small collection of retail food chains such as Burger King or McDonalds, Dunkin Donuts, Starbucks or Panera Bread etc. They also have various retailers to provide tourist gifts and often have information services for travelers. 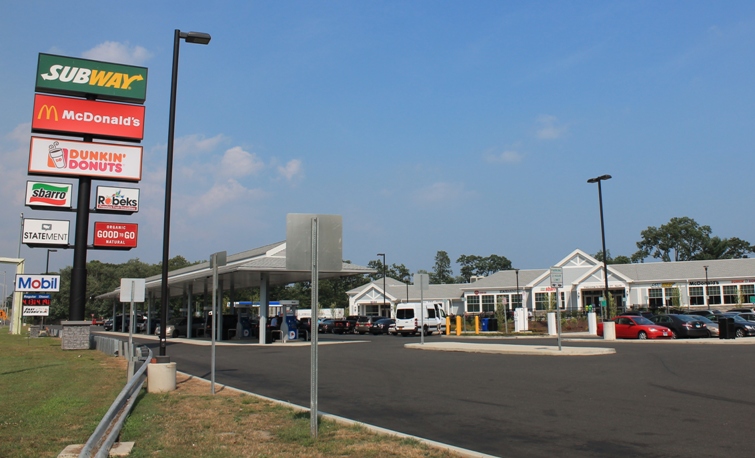 There are no specific ‘speed cameras’ that I am aware of that exist beyond red light cameras at intersections, which are usually signposted and are not that common anyway. Speeding infringements are detected more usually by patrolling police cars.

Be warned that police presence on both local and highway roads is high with both town and State police patrolling to catch speeding as well as other offences. In local towns like my own, police are seen frequently and will stop people for even minor traffic infringements.

Police can be fairly serious here and so making rude comments or jokes is not advised. If you are pulled over, remember to stay in your vehicle unless the police officer requests you get out of the car. You will standardly need to provide your driving license, insurance papers and car registration to any New Jersey police officer who demands these. Make sure you carry these in your car always and stay cool and listen to what the officer is saying.

9.   Be Prepared for the rude “Jersey’ driver

I had no idea that this is such a well known fact about New Jersey but some drivers here can be very rude and impatient. A number  do not follow road rules and they can be quick to beep you with the horn or flip the bird at you. Tangle with these people at your peril. Remember guns are much more available here, so the riskiness in confronting an irate driver is much more than at home.

Your last test before qualifying to drive in New Jersey: Answer this roadside Trivia

OK. To ensure you are fully awake and ready to drive here in New Jersey, here is one last test of your driving knowledge.

Question: what is a Jitney? 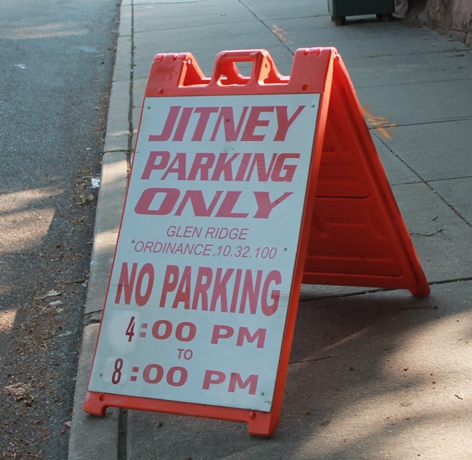 What is a Jitney? Well whatever it is, it was preventing me parking there. Photo © ExpatAussieInNJ

Answer:  ‘A small bus or minibus which carries people around like a taxicab on a particular route.’

Well if you knew this already, you must have been born in New Jersey.

Welcome to the slightly weird world of driving in New Jersey.

2 thoughts on “Nine Fundamentals for Expats driving in New Jersey”